I was chatting with a mate a while back about my desire to change careers, and she asked me if I felt I was an expert in anything.

We laughed, because everyone knows Boob Men don’t come much bigger than me. What can I say? I’ve never been any different. All I know is that any time a decent set of boobs appears in front of me, I lose the ability to speak. I’m like a rugby league player trying to string a sentence together.

Lately though, boobs have been messing with a close friend of mine and they’re starting to lose their appeal. They’ve tried this before with other friends, even succeeded on two occasions in taking great women I knew. But this time I’ve been a little closer to the action, and it’s highlighted to me how little I understood of breasts at all.

I suspect some of us girls are a bit blasé about breast cancer. We are bombarded with ‘breast cancer’ messages and campaigns almost to the point of being desensitized by it all. We know to check our breasts and we know the risk factors from lifestyle choices. Sure it can kill us, but the statistics are on our side, and most of us know at least one woman who’s been diagnosed, had a lumpectomy and a round of treatment and come out of it the other side with little to show for it other than a new hairstyle.

Breast cancer is horrible. It is a hideous, nasty, insidious disease that attacks us at the very core of our being, not only because of the importance we place on our breasts, but because our bosom is also where our heart is, where so much emotion is stored and felt – as though our chests needed any more pressure placed on them. For all the feminist ranting about the over-sexualisation of breasts, the truth is that our boobs are more than just utilitarian objects designed to feed babies.

We are destined to have a dysfunctional relationship with our breasts. From the minute our chests begin to fill out, or even more awkwardly don’t, they are an undeniable sign of our burgeoning sexuality that is visible to the rest of the world. We are judged on them, and judge ourselves on them, from the minute they appear. The other things that come with puberty, like pubic hair and menstruation aren’t readily available for viewing (well, you’d hope not), but our breasts? We have no control over them. They force us to confront our body’s development in comparison to our peers, and often they’re the cause of some pretty soul destroying taunts as we negotiate adolescence. Some of us are lucky enough to get through it all and end up happy with what we’ve got mammary-wise. Some of us get there via push up bras and cosmetic surgery. Some of us never learn to love our breasts at all. And for an increasing number of us, we wade through all that only to have our breasts betray us and develop life threatening tumours anyway.

It’s a lonely journey, cancer. Much as she has many people there for her, no one is really there with my friend. I don’t know exactly how bad the post-surgical pain was, although her tears gave me some idea; I didn’t know exactly how rattled she was by the diagnosis, although I could sense it in her text messages and emails and every black-humoured remark. I didn’t know how scared she was of what the future held, although I could guess. I was scared for her too. And I may have been alongside her in the hospital for part of it, but only one of us was the patient.

I sat in a scanning room in Nuclear Medicine, arguably the grimmest part of any hospital, while she had radioactive fluid injected into her nipple by a doctor she’d met only minutes before, the same doctor who was at pains to make sure it was okay I be in the room lest I get a nipple flash – as though there’s something awkward about a friend seeing your boobs, but not a bunch of medical staff. The room, at once high tech and 1960s retro, was a bit like the set of The Thunderbirds. The off-grey walls and floors and harsh lighting only added to the alienation. I watched her being slid into the PET scanner, manoeuvred and bossed around by staff who go through it too many times a day, saw them tape her breasts and draw guides for the surgeon on her skin in Nikko pen. I kept wanting to say “you know that’s a person there, right?” as they joked amongst themselves and worked out where to put the markings. It was all I could do not to reach out and grab her hand, give her some form of human contact amongst all the science fiction.

And yet I saw some of the sweetest moments of humanity in that hospital too. Fleeting connections between strangers that made all the difference to both of them – whether between the staff and patients, patients and their visitors, or between the patients themselves. There is an immediate level of intimacy created when people are brought together through illness. Maybe it’s just because someone else knows how bad the hospital food is, but it’s a connection nonetheless.

The fatalist in me says that breasts are just breasts – who cares if they go? And actually, I do believe that. Having a killer rack suddenly takes on a whole new meaning when there’s a Grade 3 malignant tumour nestled in your cleavage. If they’re out to kill you, then get rid of them. It’s not like your personality is stored in your mammary glands.

But I still have my breasts intact, and I don’t know what it’s like to mourn their loss. Another patient, full of good intentions, said that it’s better to be safe than sorry. She was right, of course, but my friend’s response “I’m both” was gut-wrenching.  It doesn’t matter how many times a woman is told she’s sexy, there’s a part of her that fears being undesirable. So imagine the psyche of a woman battling the combined effects of chemotherapy – the disappearance of distinguishing features like eyebrows, eyelashes and hair; the nosebleeds, blistered skin, lethargy, nausea, weight gain (or loss depending on the person) – along with the crippling depression that is both a symptom and a result of treatment, and whose scars across her chest continue to pull and hurt and send phantom pains shooting from the nerve endings where her nipples used to be. Can you imagine the strength it takes just to get out of bed some days, let alone out the front door? Seeing someone who oozes self-confidence be so vulnerable is heartbreaking. This should not be happening to her.

And yet, why not her? That’s the nature of this stupid thing. It doesn’t give a shit that she’s fought enough already to be here. Cancer is completely indiscriminate in its selection process. It’s never cared about any of the people I know who’ve answered that knock on life’s door.

I simply can’t fathom how anyone copes with being told they have cancer. It’s terrifying enough as a friend to hear words like tumour, mastectomy and chemotherapy. To be able to remain a functioning member of society when you are at your most fragile; when control of your life has been taken from you and put in the hands of a stranger now known as your oncologist; when dealing with the shock and fear and disbelief at how quickly life exploded has turned your brain to mush and left you unsure of every decision you make; when you can deal with it all with humour; when you can maintain some semblance of life despite all that, and when you can come out the other end never once having asked “why me?” while knowing there’s still so much ahead to get through…well frankly, that’s where my words run out.

And so, my love affair with breasts has hit a rocky patch. I still think they’re lovely, but I now view them the way I view a potentially dangerous dog. I’m happy to play with them, but I expect them to attack. 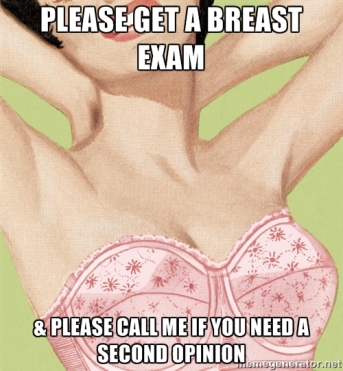 4 thoughts on “A Killer Rack”