It’s two days before my period is due and as usual my mood is hanging somewhere between moderately frustrated and thoroughly homicidal. This month however it’s not PMT that’s the cause of my irritation, but another lesser known disorder called Unavailable Tampon Syndrome, or UTS. Most of you won’t have heard of it because…well…I just made it up, but the seriousness of the condition should not be underestimated.

UTS occurs when the only pharmacy you’ve found within a 20km radius that sells the only tampons you can use decides not to stock them any longer. Some lucky women may never suffer this affliction, and others may only have to confront it once or twice in their life, but if you’re anything like me you come to anticipate it on a monthly basis along with all the other joys of menstruation.

In my case UTS is caused by the increasing difficulty in finding stockists of Tampax Super Plus tampons (and yes I know that just gave you more information about my menstrual cycle than you were hoping for, but I promise whatever you’re imagining isn’t as bad as the reality often is. I hope that makes you feel better). For the last three years I’ve been UTS free as my local pharmacy has always had a supply of Tampax Super Plus on hand, sitting on the shelf gathering dust until I trundle in with my abnormal uterine bleeding every four weeks.

It had been going so well. Where the supermarkets and corner stores had failed me, I could always rely on this one chemist to carry them. Once a month, as soon as my tits began to feel like watermelons, I’d duck in for my usual 30 pack of Nurofen Plus and two boxes of Super Plus. I’d go home, drug up, plug up and spend the next four days contemplating a hysterectomy. Too easy.

Yesterday all that changed. Standing in the feminine hygiene aisle desperately scanning the shelves, I felt myself relapsing. There were regular tampons, super tampons and light tampons (pfft, who uses those?!) There were organic cotton, fluro wrapped and easy twist open tampons. There were even slim ones, which I guess is good if the other styles make you look fat. But nowhere to be seen were the Tampax Super Plus tampons. Even worse, there wasn’t a space on the shelf where they should have been.  I knew where this was leading. Unavailable Tampon Syndrome.

Obviously my stunned expression was noted by the staff, because I was soon asked if I needed help. “Where are the Tampax Super Plus?” I asked in a way that I hoped disguised my alarm. “Oh, they’ve been discontinued by the manufacturer” said the guy serving me, a gay boy I know socially but not well enough for us to be totally relaxed discussing heavy periods. He was no doubt wishing he’d taken more notice of where I was standing when he offered his assistance, and desperate to cease discussing sanitary protection immediately. Clocking my look of disbelief, he followed up with “that’s solid information.” He was trying to act like he cared, but the curled lip and backwards step he took upon realising he was discussing things of a menstrual nature betrayed him, and I’m pretty sure as soon as I left he was texting all his friends about how close he came to actually having to deal with a period. Apparently there are some aspects of being a woman that even the campest man just doesn’t want to embrace. When he asked why I couldn’t just use the Super tampons I decided it was easier to leave than go in to the finer details of my flow with him, and frankly I was ready to suffocate him with a packet of overnight pads anyhow.

In a total flap, I went home and panic bought $157.00 worth of tampons online from the only website I could find that had them in stock, and paid an additional $20.00 for urgent delivery. I know this seems like over reacting but panic buying before disasters is human nature, and trust me when I say that the 2011 Brisbane floods have nothing on the sort of flooding that can occur from my beaver dam. Eventually I contacted Proctor & Gamble to ask them for clarification, and received a reply assuring me that Tampax Super Plus were most definitely still being manufactured. I bloody well knew it.

I am not trying to be difficult, but to have to beg pharmacies to stock something that is essential is annoying at best. To be lied to about why they’re not stocking them is downright insulting. I don’t choose to buy Tampax Super Plus tampons because I get off on buying the biggest, most expensive tampon available; I have a medical condition that requires them. Of course I’d prefer to use the pretty little bullet shaped ones everyone stocks because they’re compact and easily hidden and come in bright colours, and I can buy the fucking things everywhere including petrol stations. Unfortunately, that is not how my body works.

I understand that Super Plus tampons will never be the bestselling item in the Tampax range, not every gal can be lucky enough to experience the sheer joy of a heavy period. But that doesn’t mean the women who require them cease to exist. And the most frustrating part of all of this isn’t the fact that they are so hard to buy. It is that on almost every occasion where I’ve enquired whether a pharmacy stocks them, a female assistant has said to me she would buy them too but she didn’t know they existed. It makes me wonder just how well Super Plus tampons would sell if women knew they were an option. Perhaps it’s time for the chemists of Australia to consider that a full range of tampons is slightly more important than a full range of Revlon nail polish?

As for the guy who told me they’d been discontinued? I can’t wait to drop a Tampax Super Plus in his drink next time I see him out. Just wait until he sees how much liquid those suckers can hold! 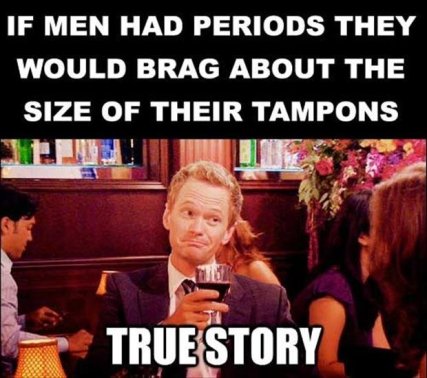